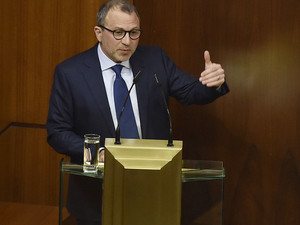 Free Patriotic Movement chief MP Jebran Bassil on Tuesday urged the new government to “impose a monetary plan” and resist what he called the “blackmail” of both politicians and protesters.

“If the government wants to overcome the crisis and this is still possible, it has to raise its voice… and it should not bow to the blackmail of politicians seeking to keep their privileges nor to the blackmail of street protesters voicing unjustified political demands,” Bassil said in a speech before parliament as MPs debated Cabinet’s policy statement ahead of a confidence vote.

Bassil called on the government to “impose a comprehensive monetary plan in coordination with the central bank governor” and “end the policy of blind borrowing for high interest rates.”

And calling on the government to “legalize and regularize the capital control, recover the stolen funds and expose the culprits,” Bassil called for “restructuring debt after negotiating and conducting a comprehensive study and survey.”

“We will give a chance and if the government does not act quickly and differently without bowing to blackmail, we will be the ones who will topple it and we won’t wait for anyone. We will act against it in parliament and on the streets. Beware because the time is tight and the options are clear, so do not waste the time or the chance,” Bassil went on to say.

libanaisresilient 13 hours ago
OMG another big step towards the Presidency! Long live Bassil! You're the Man!

constantine 7 hours ago
The voice of justice.

"constantine 1 hour ago
Without the FPM at the helm there would be no Lebanon.
Lebanon would be a province of ISIS reporting to Riadh.
The reason why Minister Bassil is being subjected to harsh criticism by thieves and traitors to stop him from taking their riches and beating them in the national treasury."

The pos has all the answers now. Yet, he has been in power for the last 14 years and has done nothing. Electricity alone which he has been in charge of for the last 10 years has cost the treasury over $40 billion dollars in subsidies excluding the shady deals he and his cronies in the ministry made.

During the Miqati government he requested $1.5 billion dollars to build new power plants that General Electric said they would build for half the price. He insisted this money would be spent according to his own discretion and not subject to auditing by the Lebanese Accounting Panel ( a government agency).

Execution by the people is what I prescribe for this really unlikeable pos!

“If the government wants to overcome the crisis and this is still possible, it has to raise its voice…". Yep, that's definitely the problem. Poor, poor government needs to be heard. My head's gonna explode!

4 minutes ago Diab from parliament: Our hearts are outside, beating alongside the people.

I don't get it... This incompetent arrogant pos is giving advice?