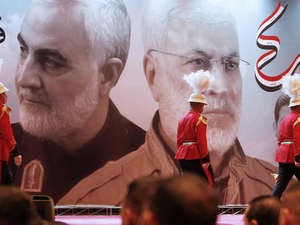 Muhandis was the deputy head of the Hashed al-Shaabi, a loose network of paramilitary groups formed in 2014 to fight jihadists that has since been absorbed into the Iraqi state.

He, Soleimani and eight others were killed in the January 3 U.S. strike outside Baghdad's International Airport that Iraq's government slammed as a violation of its sovereignty.

To mark 40 days since their deaths, a tradition in the Middle East, top officials held a memorial service in Baghdad's high-security Green Zone.

"The great crime committed near Baghdad airport against the commanders of victory (was) a crime against humanity, against Iraq, against our sovereignty and the defense of our children," Fayyadh told those gathered.

"The blood of these martyrs, in my opinion, will re-establish this Hashed ... May we be a thorn in the eye of anyone wishing to deprive Iraq of its sovereignty."

He later told a larger gathering that the Hashed would not be daunted by "a misleading media campaign or by targeting people."

According to Hashed sources, the network's military elite have been hiding out in Iran since the U.S. strike out of fear that they, too, may be targeted.

Muhandis was close to Iran and worked with his mentor and friend Soleimani to broker deals among Iraq's fractured political elite.

Born Jamal Jaafar al-Ibrahimi in 1953, Muhandis had both Iraqi and Iranian citizenship and spoke fluent Farsi.

In the 1980s, he was a leading commander in the Badr Corps, a unit of Iraqi fighters founded in Iran in opposition to then-dictator Saddam Hussein.

After the U.S.-led ouster of Saddam, Muhandis helped found Kataeb Hezbollah -- a hardline Iran-backed faction that targeted U.S. troops -- and was sanctioned as a "terrorist" by the U.S.

His portrait was hung up across Baghdad neighborhoods and at the airport, where a small memorial has been set up on the roadside where the strike took place.

The attack so outraged Iraq's parliament that it swiftly voted to oust all foreign forces, a longstanding demand of the Hashed and its political arm, Fatah.

Some 5,200 American troops are based in Iraq, leading the international coalition fighting the remnants of the Islamic State group.

The U.S. embassy in Baghdad had issued an alert to its citizens on Monday not to approach the facility due to the risk of rallies as part of the commemorative day.

A day earlier, Kataeb Hezbollah hung effigies of Trump and American soldiers across the Iraqi capital.

During the speeches on Tuesday, the audience briefly broke out into chants of "No to America!" but there were no incidents of note and none of the speakers made specific threats of retaliation against the U.S.