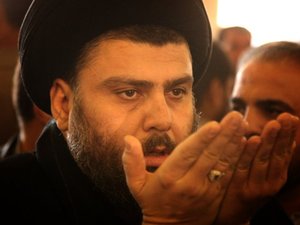 Controversial Iraqi cleric Moqtada Sadr announced on Tuesday he was dissolving the "blue caps", an organised unit of his supporters accused of deadly attacks on anti-government protests in recent days.

Sadr, who has a cult-like following of several million Iraqis, had first backed the popular rallies demanding a government overhaul when they erupted in October, but has switched course multiple times in recent weeks.

He finally broke with the broader movement when he endorsed the premier-designate Mohammad Allawi, seen by protesters as too close to the elite they have railed against for months.

Since then, diehard Sadr supporters wearing blue caps have raided protest camps in Baghdad and the Shiite-majority south, with eight protesters killed in the ensuing violence.

The cleric has faced growing criticism over the violence and on Tuesday, he suddenly took to Twitter.

"I announce the dissolution of the 'blue caps,' and I do not accept the (Sadrist) movement's presence in and of itself at the protests, unless it is absorbed into them," he tweeted.

In the early days of the movement, Sadr supporters were seen as the most organised and well-stocked of the demonstrators but his recent tweets have infuriated activists.

After backing Allawi, he ordered the "blue caps" to help security forces reopen schools, roads and public offices shut down for months by anti-government sit-ins.

But Sadr has insisted that his movement ultimately wants "reforms".

Allawi has until March 2 to form his cabinet, and is expected to govern only until early parliamentary elections.

"We hear that there are pressures from political parties and from sects over the forming of the temporary government," Sadr tweeted on Tuesday.

"This could lead us to completely wash our hands of all of it."

But one of his senior aides said Saturday that the new prime minister must not include members of the political elite in his new cabinet.

"If Sayyed (Lord) Moqtada hears that Allawi has granted a ministry to any side, specifically the Shiite armed factions, Iraq will turn into hell for him and will topple him in just three days," Kadhem Issawi said.