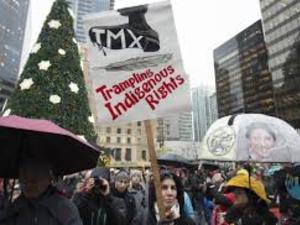 Indigenous protests against a new pipeline in westernmost Canada scaled up across the country on Tuesday with major train disruptions, port blockades and sit-ins at government offices.

Over the past several days, the Royal Canadian Mounted Police moved in to enforce a court injunction and clear the original protest blocking work on the Coastal Gas Link natural gas pipeline opposed by Wet'suwet'en hereditary chiefs in British Columbia.

That provoked others in solidarity with the chiefs to try to "shut down Canada," leading to major transportation disruptions and dozens more arrests by police.

On Tuesday a major rail line connecting Toronto, Ottawa and Montreal was shut down, forcing more than 20,000 Via Rail passengers to cancel trips.

Dozens were arrested on Monday for trying to block access to the Pacific port of Vancouver, while on Tuesday another protest set up at the Atlantic port of Halifax.

In Toronto, meanwhile, a few dozen protesters took over Crown-Indigenous Relations Minister Carolyn Bennett's constituency office, demanding that the "RCMP back down" and that the Can$6billion (US$4.5 billion), 670-kilometer (415-mile) pipeline be scrapped.

In Ottawa, a group occupied the lobby of the Justice Department.

And in Victoria, a ring of protesters surrounded the British Columbia legislature, preventing access for lawmakers.

Transportation Minister Marc Garneau said the government was concerned by the "illegal" and "significant disruption" to rail services.

"We hope this will get resolved as quickly as possible because it's having an important impact on the economy of the country," he said.

Protesting on railway tracks "could also be dangerous," he added.