IMF Due in Argentina for Debt Restructuring Talks 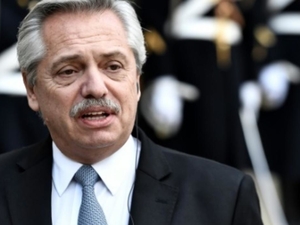 Delegates from the International Monetary Fund were to arrive in Argentina on Wednesday to begin talks on restructuring the recession-hit South American country's crippling foreign debt.

The government in Buenos Aires is hoping to renegotiate $195 billion out of a total debt of $311 billion -- including a deeply unpopular $44 billion bailout loan from the Washington-based IMF in 2018.

President Alberto Fernandez insists Argentina cannot pay its debt without economic growth, which is currently hampered by inflation of more than 50 percent, as well as mounting poverty and joblessness.

"With the IMF meeting, we'll start to see what the government's economic plan is," economist Hector Rubini from Salvador University told AFP.

"The creditors need to know what chance Argentina has of paying its debt."

Economy Minister Martin Guzman is also due to present his fiscal plan to Congress on Wednesday.

"Despite its statements that it wants to pay (its debt), so far the government has lacked clarity around key political decisions," said the risk evaluation company Verisk Maplecroft.

Guzman has already met with the IMF, while Fernandez embarked on a European tour to drum up support for his proposals.

So far, the IMF and the Argentine government have both spoken positively about their exchanges.

"The IMF is showing a willingness because it wants to get paid and also in part because it contributed to this situation," said Rubini, referring to the original bailout loan agreed with former president Mauricio Macri for a record $57 billion.

When assuming power two months ago, Fernandez refused the $13 billion of disbursements outstanding, bringing the total to $44 billion.

Practically unable to borrow from the markets, Fernandez's government has until March 31 to reach an agreement with its creditors before it will almost certainly be unable to meet its repayment obligations.

Fernandez wants to avoid another devastating default like in 2001, when Argentina bailed out on a $100 billion debt.

"The best agreement is the quickest one."

It is estimated that Argentina will need to fork out $34.3 billion in repayments and interest in 2020.

Rubini says the country will have to pay $200 billion over the next four years -- a hard ask for a country with international reserves of just $44.68 billion.

Argentina has proposed to make its offer to creditors in mid-March.

"It's a simultaneous negotiation with the IMF and creditors," said Rubini. "At some point everyone's going to have to get together: Argentine authorities, IMF experts and creditor groups."

He said the IMF usually expects other creditors to agree to a reduced debt repayment, but those creditors will be looking for the lender to not only accept one itself, but also take partial responsibility for Argentina's debt crisis.

Argentina has yet to miss a debt payment but did postpone some bond repayments under Macri.

And on Tuesday, Buenos Aires postponed the payment of another bond that was to have come due later this week.

"This debt issue has to be resolved because either Argentina returns to growth or there will be another outbreak of social unrest," said Rubini.