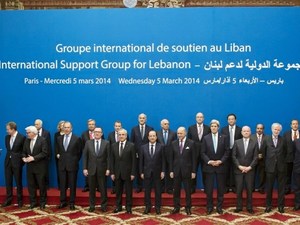 The International Support for Lebanon issued a statement on Wednesday reaffirming support for Lebanon and calling on PM Hassan Diab’s government to stop and reverse the deepening crises and address the needs of Lebanese.

Following the vote of confidence by the Parliament yesterday evening, the ISG calls on the newly confirmed Government of Lebanon led by Hassan Diab to swiftly and resolutely undertake timely, tangible, credible, and comprehensive set of measures and reforms to stop and reverse the deepening crises, to address the needs and demands of the Lebanese people.

Recalling the statements of the ISG meeting in Paris on 11 December 2019 and in Beirut on 23 January 2020 the ISG underlines the importance of action to regain the trust of the Lebanese people and that of the international community and unlock future international assistance for Lebanon. The ISG appeals to all political forces and leaders of Lebanon to prioritize their support for reforms when in the national interest and for the benefit of the people and the country.

The ISG reaffirms its willingness to support Lebanon as it undertakes efforts to restore economic stability, credibility of the financial sector, a critical review of the 2020 budget to ensure sustainability, implementation of key sectoral reforms like the energy sector, reforms of state-owned enterprises to ensure efficiency and consumer benefit, and the passing and implementing of effective procurement laws.

The ISG also reaffirms its willingness to support credible efforts by government leaders to tackle corruption and combat tax evasion, including adoption and implementation of an anti-corruption national strategy, the anti-corruption agency law and judicial reform, and other measures that ensure concrete changes are made and guarantee both transparency and full accountability.

The ISG reaffirms the need for internal stability and the right to peaceful protest to be protected.

The ISG reiterates the importance of Lebanon implementing Security Council Resolutions 1701 (2006), 1559 (2004) and other relevant Security Council resolutions, as well as the Taif Accord and the Baabda Declaration and its commitments made at the Brussels, Paris and Rome conferences.

The ISG members reaffirm their continuous strong support for Lebanon and its people, for its stability, security, territorial integrity, sovereignty and political independence.