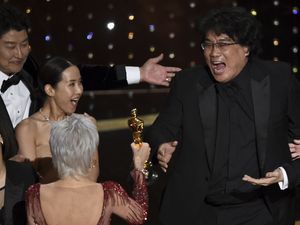 South Korean shares linked to director Bong Joon-ho's Oscar-winning movie "Parasite" -- a dark comedy about the gap between rich and poor -- have soared after investors piled in following its unprecedented Academy Awards.

Shares in its production company, distributor and even an instant noodle maker featured in the film have all shot up since "Parasite" became the first non-English-language film to win Hollywood's top prize on Sunday, prompting celebrations in South Korea.

By Wednesday's close, Barunson E&A, the company that produced "Parasite", was up 91 percent on Seoul's junior Kosdaq market from Friday, the last trading day before the Oscars ceremony.

Nongshim, a top South Korean food and beverage maker that makes the two instant noodles in the recipe featured in the movie, was up 11 percent over the same period.

And "Parasite" distributor CJ ENM, already one of South Korea's biggest media companies, was up 4.5 percent in the main Kospi market.

"Parasite" cost a reported 13.5 billion won to make -- $11 million -- but since its premiere at the Cannes Film Festival in May, it has earned $130 million worldwide.

US media giant HBO has secured the rights to adapt it into a miniseries.