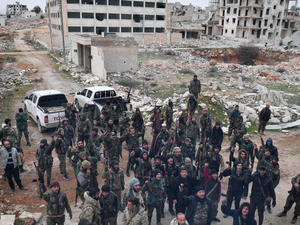 Syrian regime forces Wednesday pushed on with their offensive in the country's northwest, securing areas along a key national highway they seized, as tensions spiralled with Turkey which supports rebel groups.

The regime of Syrian President Bashar al-Assad, which is also backed by Iranian forces, has made major inroads in the last opposition-held area in the northwest, sending hundreds of thousands of civilians fleeing their homes in harsh winter conditions.

Heightening tensions, a regime helicopter was downed by rocket fire in Idlib province on Tuesday.

Turkish media blamed the attack on rebels while war monitoring group the Syrian Observatory for Human Rights said it was carried out by Turkey. Ankara has not claimed responsibility.

The pro-government al-Watan newspaper on Wednesday said three air crew were killed in the attack. An earlier toll by the Britain-based Observatory had said two pilots had died.

In their latest push, regime forces have seized a string of towns and villages from rebels and jihadists in the west of Aleppo province since Tuesday night, the Observatory and al-Watan reported.

Hours after completely retaking the economically vital M5 highway linking the country's four largest cities, they cleared all areas directly west of the road in Aleppo province of rebels and jihadists.

"Areas adjacent to the M5 from the west in Aleppo province are now under regime control," Observatory head Rami Abdul Rahman told AFP.

Regime forces were also poised Wednesday to push their rivals out of the road's eastern environs, in a move that would completely secure the motorway from rebel attacks, the monitor and al-Watan said.

That M5 links the capital Damascus to the second city of Aleppo through the major hubs of Homs and Hama, and has been a key target for the government as it seeks to restore territorial control and rekindle a moribund economy.

Syria's last major opposition pocket, which is home to three million people, is dominated by jihadists of the Hayat Tahrir al-Sham alliance and their rebel allies.

Government forces have pressed on with a blistering assault in the region since December, forcing nearly 700,000 people to flee their homes in the largest exodus of the Syrian war, according to the United Nations.

Turkey, which already hosts more than three million refugees, fears a massive fresh influx from Syria and has kept its border closed to the newly displaced people in Idlib.

It has sent reinforcements to Syria in recent days following the series of exchanges with the Syrian army, the latest of which saw five Turkish troops killed by regime shelling in Idlib on Monday.

According to an AFP correspondent in Idlib, a new convoy of Turkish armoured vehicles arrived Wednesday in the town of Binnish, northeast of Idlib city.

Erdogan on Tuesday warned Syria's government that if there are more attacks against Turkish forces, "they will pay a very, very heavy price".

US special envoy for Syria James Jeffrey, who arrived in Ankara late Tuesday, was due to discuss the escalation with Turkish officials.