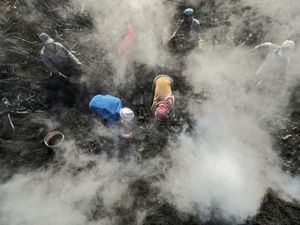 To fuel Egyptians' love for shisha pipes and barbecues, Said Mahrous and his men toil in an open-air furnace, inhaling thick plumes of smoke day in, day out.

Covered in soot and sweat, their faces blackened, they labor in a village near Cairo over burning mounds of charcoal, without gloves, facemasks or health insurance.

Health and environmental concerns fall by the wayside when lumps of charcoal must be bagged at the end of the day and transported across the country.

"The smoke doesn't really affect me -- I've gotten used to it working here for over 35 years," says Mahrous.

"I'm an old fahham from way back," adds the 48-year-old, using the local term for a coal worker.

"My father plucked me out of school, and I have continued the tradition because he was one too."

The site in Inshas, in the fertile Nile River delta north of the Egyptian capital, employs dozens of men working for about 2,000 pounds ($125) a month.

The workers take tree trunks sourced from nearby towns, clear them of branches and stack them according to their girth.

They then throw them on 40-square-meter (430-square-feet) patches of field that become smoldering furnaces.

The trunks must be dried out first, a task that takes about a year, says Mahrous.

"Then we build the furnace, add rice straw and start the fire, which burns for about 10 to 15 days."

Dirt and rice stalks trap the heat and stop the fire from spreading.

Wood from mango and orange trees is charred for smoking shisha, while the charcoal from casuarina, camphor and olive trees is used for barbecues.

The mounds are then hosed down with water to cool them, but the tinders still smolder underneath as smoke rises up into the air.

Using shovels, the workers dig down and break up the charcoal, sifting and then bagging it.

About two tons of wood (4,400 pounds) produce one tonne of charcoal.

Mahrous admits the work is taking a toll, telling AFP that "the heavy lifting of tree trunks sometimes hurts my back."

"For my kids, I hope they can get well paid jobs," he says.

"But if they can't find any, then they will work with me."