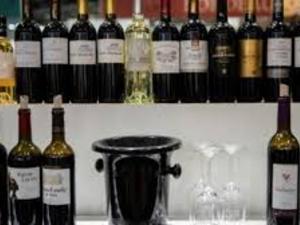 French wine exports to the United States plunged by almost a fifth in the last quarter of 2019 as punitive tariffs kicked in, the FEVS industry body said Wednesday, and warned of a "challenging year" ahead.

Despite an overall 5.9 percent rise in wine and spirits exports last year -- some 14 billion euros ($15 billion) in total -- the federation was downbeat as it pointed to uncertainties in its three main markets, the United States, China and Britain.

Even the global increase, it said, was partly motivated by fear as jittery buyers placed "anticipation" orders "in an international context of strong trade tensions and uncertainty."

The French Association of Wines and Spirits Exporters repeated a call it launched Tuesday for the government to set up a 300 million euro emergency compensation fund.

"The 2019 positive result must not be misinterpreted: international political environment and trade tensions had a severe effect on French wines and spirits exports, suggesting 2020 will be a challenging year," FEVS president Antoine Leccia said in a statement.

A key concern was the entry into force on October 18 of additional tariffs of 25 percent on French wine exports to the U.S., which the FEVS blamed for a 17.5 percent drop in bottled still wine exports in the last quarter of 2019, along with a turnover decrease of 40 million euros.

Last week, the French finance ministry said the value of wine exports to the U.S. fell 44 percent from October to November last year.

The tariff hike was in retaliation for EU subsidies to Airbus, arch-rival of America's Boeing.

The FEVS also pointed to an economic slowdown in China and political tensions in Hong Kong, and said its export turnover in the region declined by 3.1 percent.

Conversely, uncertainty related to Brexit negotiations contributed to a 4.4 percent increase in "anticipated" wines and spirits exports to the UK, said the body, though this trend may not last.

"The international environment creates a high-risk situation for our exports on our top three markets: USA, United Kingdom and China," the FEVS said.

The three countries account for 50 percent of France's overall wine and spirits sales.

"Obviously, the situation appears most worrying -- and consequently most urgent -- on the U.S. market," the statement said.

"Arbitrary sanctions imposed on our industry as of October 18, 2019, threaten our growth on the world's leading market. This will have significant long-term repercussions on exporting companies and, more broadly, on the 500,000 wine industry stakeholders."

Without prompt action from French authorities, the sanctions will have an even bigger impact in 2020, the FEVS said.

"It is now essential for our government to provide practical solutions to the demands addressed by our industry since October 2019, including the creation... of a 300 million euro compensation fund," Leccia said, describing it as an "emergency" measure.

"It is time for the government to shoulder its responsibilities towards our industry."

The French government has said it wants the European Union to pick up the tab for any compensation.

A delegation of winemakers are set to meet Airbus CEO Guillaume Faury on Friday to discuss their losses.