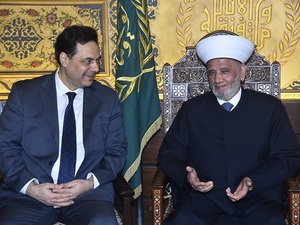 “After the government won parliament’s confidence, His Eminence the Mufti of the Republic called me and we agreed on this meeting, that’s why my visit today is very normal,” Diab said after the talks.

“The Mufti is playing a unifying role that preserves the position of Dar al-Fatwa and he is a dear friend and brother. I trust his wisdom and we are counting on it for the unity of ranks and stances,” the PM added.

“We discussed the general situations and the financial and social affairs as well as the need to unify the efforts of all the loyal ones in order to overcome this difficult period that Lebanon is going through,” Diab went on to say, adding that he agreed with the Mufti on “maintaining communication for the sake of Lebanon’s interest and the service of Muslims.”

Daryan for his part noted that the government “has won (parliament’s) confidence.”

This is the first meeting between Daryan and Diab since the latter’s designation as premier.

New premier Diab, a little-known academic and former education minister, was tasked with forming a government in December after mass rallies against official corruption and economic woes forced premier Saad Hariri to resign.

After bay el kil we now have ra2is el kil? LoL
This is weak, real weak.