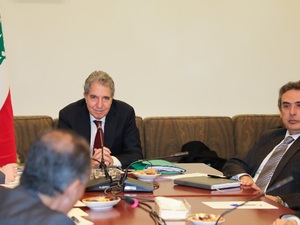 Diab’s meeting with the World Bank team was held away from reporters’ eyes according to TV networks.

MTV meanwhile reported that Diab is inclined to ask for a “technical consultation” from the International Monetary Fund that would not inflict harsh measures on Lebanon.

“This consultation would lay out a roadmap for what the government can do in the face of the crisis,” the TV network added.

MTV also said that a meeting would be held Wednesday afternoon with IMF officials at Diab’s request.

we all know how you re going to solve the crisis= steal money from the poor while leaving those rich go away with their money...

lol--this country needs more than advisors and a roadmap. It needs huge underlying changes to the way business is done here and to do that it needs a shock. This country is like a company in bankruptcy---it needs to be put in receivership and have someone else manage it for a while and babysit it while changes are done.

When they are talking about talking, it is actually just talking. This country has no direction and it needs an influx of cash and expertise but not a single entity is willing to give cash without it making fundamental changes, and not many people see that ever happening.