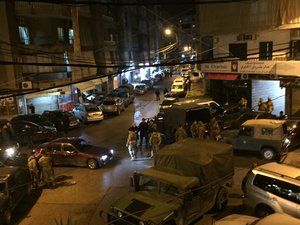 Seven people have been injured in a clash between Baouchriyeh residents and members of the Zoaiter family who live in the area, MTV reported on Wednesday.

The TV network said the tensions erupted Tuesday following a confrontation between a bus driver from the Zoaiter family and Baouchriyeh residents.

Security forces have since deployed in the area and arrested several people.

In remarks to MTV, a young man from Baouchriyeh accused members of the Zoaiter family of opening fire at residents and buildings.

Strong Lebanon bloc secretary MP Ibrahim Kanaan meanwhile contacted security and judicial authorities in the wake of the clash, voicing support for “the army’s measures and its arrest of four people until the moment ahead of bringing the situation fully under control.”

Kanaan also called on authorities to “be strict in pursuing violators, attackers of public and private property and those who caused the incident.”

MP Eddy Abillama of the Lebanese Forces for his part visited the area and sought to pacify the situation.

“We are one people but we heard profanities at all levels and there are infiltrators among the residents of the Zoaiteriyeh neighborhood,” he said.

He also warned against “sowing discord among people,” noting that his party was exerting efforts to “avoid disputes.”

Media reports said a local mayor of Jdeideh-Baouchriyeh, Charbel Khoury, was among the wounded.

That whole Zoaiter clan should be given its own jail wing somewhere--preferably in a jungle island with no air conditioning or windows.

These buses are a curse on the Lebanese roads. They drive like crazy, pollute when their diesel engines are messed with in order to save fuel and act as if the roads are theirs.

Don't you see the clear symbols of religious belongingness on the rear windshield? These buses are a time bomb for some really nasty business.