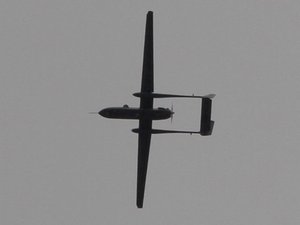 The Lebanese Army on Wednesday opened fire at an Israeli drone over the southern border town of Mays al-Jabal, the National News Agency said.

The drone, which was not hit, was flying over the Kroum al-Sharraqi area, NNA said.

“The aircraft immediately returned to the occupied Palestinian territories amid a security deployment by the Lebanese Army and UNIFIl forces in the aforementioned area,” the agency added.