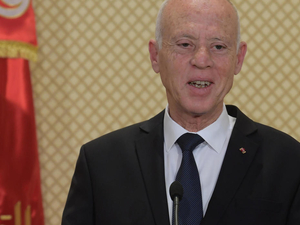 Tunisian President Kais Saied's first major foray into international affairs appears to have backfired, with his diplomatic strategy called into question over the dismissal of Tunis' UN envoy.

He draped himself in a Palestinian flag on the night of his election and has refused a "normalisation" of ties with the Jewish state, repeating strongly anti-Israel positions.

But in a sudden twist, Tunisia fired UN envoy Moncef Baati last Friday, accusing him of failing to consult the foreign ministry and other Arab countries on a strongly-worded condemnation of Washington's controversial Middle East peace plan.

"The manner in which the dismissal was carried out raises many questions around the diplomatic strategy of the presidency" and whether the move had been thought through, political commentator Youssef Cherif said.

Diplomatic sources said Baati had gone further than Saied had wanted in his criticism of US President Donald Trump's plan, unveiled on January 28 and seen as heavily favouring Israel.

In the week before Baati was fired, Saied had called Trump's proposal the "injustice of the century and high treason" during an interview broadcast on national television.

Tunisians took to the streets in protest against the plan in the capital Tunis and the eastern city of Sfax.

The Baati affair has caused concern about Saied's diplomatic acumen and has sent mixed signals about his approach to the Israel-Palestinian conflict, just as Tunisia took up a two-year seat on the UN Security Council in January, where it is the only Arab state represented.

Earlier this week, the Palestinians abandoned their request for a Security Council vote on the Middle East peace plan that they hoped would see the US proposal rejected.

The US had placed "very strong pressure" on other countries on the council, including threats of economic retribution, not to support the Palestinians' request, according to one diplomat, speaking on condition of anonymity.

Media reports also chalked up Baati's removal to US pressure, but the presidency denied it had bowed to any duress, instead accusing the envoy of seeking to "tarnish the image of Tunisia and its president".

Diplomats and observers shared apprehensions over the president's diplomatic strategy, particularly at a time when Tunisia must also grapple with the conflict in neighbouring Libya.

Ezzedine Zayani, a former ambassador, said the affair "undermines the credibility" of all the country's diplomatic efforts.

Arabic daily El Chourouk wrote on Wednesday that "the issue raises concerns about a possible slip in Tunisian diplomacy".

The role of the presidency in Tunisia focuses on security and diplomacy, but Saied has appeared to avoid international summits since taking office.

He declined a "late" invitation to a meeting on the Libya crisis in Berlin in January and said he was ill during an African Union summit in Addis Ababa over the weekend. His only official foreign visit has been to neighbouring Algeria.

Baati was nominated not long before Saied came to power by an executive that had furthered a fairly conciliatory diplomacy on the Israel-Palestinian issue.

His swift recall meant he missed a closed-door briefing of the Security Council by the US plan's architect, Trump adviser and son-in-law Jared Kushner. It was several days before he was replaced by his deputy, Tarek el Adab.

Commentator Cherif observed that while Saied would certainly have come under pressure to dismiss Baati, the move was consistent with the president's policy of changing officials from the previous mandate.

Saied has still not named a fully-fledged successor to former foreign minister Khemaies Jhinaoui, whom he fired not long after his election.

"Tunisia has no new government, no foreign minister. If they start dismissing key ambassadors, it adds to the void," Cherif said.