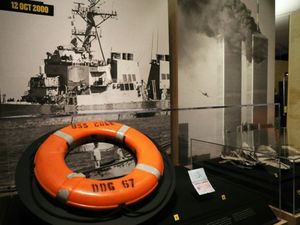 Sudan's justice ministry said early Thursday it had signed a deal with the families of the American servicemen killed in the 2000 bombing of the USS Cole in Yemen.

The deal was signed on February 7 in Washington to fulfil a key condition for removing the northeast African country from the United States' state sponsor of terrorism list, the ministry said in a statement without specifying the amount of compensation agreed.

"As part of the transitional government's effort to remove Sudan from the terrorism list, a deal has been signed on February 7 with the families of the victims of the USS Cole incident," the ministry said.

"The deal clearly specifies that the government of Sudan was not responsible for the incident or any such terrorist incident and it is doing this deal only to... fulfil the condition put by the American administration to remove Sudan from its terrorism list."

On October 12, 2000, a rubber boat loaded with explosives blew up as it rounded the bow of the guided-missile destroyer, which had just pulled into Aden, Yemen, for a refuelling stop.

Seventeen American sailors were killed as well as the two perpetrators of the attack claimed by Al-Qaeda, in an early success for the terror group and its founder Osama bin Laden.

A US court then ruled that Sudan, where the two bombers were trained, was responsible for the attack -- a claim Khartoum always denied.

In 1993, Washington listed Sudan in its terrorism blacklist for its alleged support of Islamist groups. Bin Laden used to reside in Sudan from 1992 to 1996.

If you tamper with US judicial independence or with the personnel in State and the Pentagon, you will be overthrown by some damn fool with two tanks and lots of thugs.
But this is all Congress's fault, letting courts (and State and Defense) be its shills in its just-concluded attempt to conquer the world.
My Congresswoman, Chellie Pingree, replied to my question about Congress determining that the Sisi military takeover of the elected Morsi government had been a military takeover, as Congressional rules required; she denied that the military takeover had been a military takeover so that our massive aid to Egypt could continue. Seriously, I think maybe she referred to judicial independence: those judges from Mubarak's time who sentence hundreds of people to death for one person's being murdered.