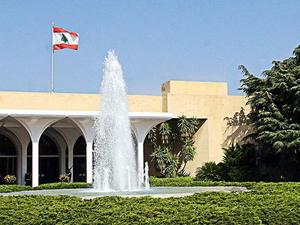 In light of a crippling economic crisis and confusion whether Lebanon should pay or restructure its international dues, a “financial and economic” meeting convened at Baabda Presidential Palace to discuss the situation, the National News Agency reported on Thursday.

Interlocutors did not make a decision on the payment of Eurobonds because “the issue needs to be studied thoroughly.”

“Several options have been studied on the Eurobond topic and we will study it thoroughly to make appropriate decisions,” Finance Minister Ghazi Wazni told reporters in a statement after the meeting.

Regarding illegitimate capital controls imposed by banks, Wazni said “banks can not keep dealing with depositors at their own discretion and the Cabinet will issue a circular in the next few days to protect depositors and the banking system as well.”

Before the meeting began, Aoun, Berri and Diab held a tripartite meeting over the situation.

Crisis-hit Lebanon is on the brink of defaulting on its sovereign debt, with a $1.2 billion Eurobond payment due next month.

On Wednesday, the government asked the International Monetary Fund to provide technical expertise on the macroeconomic challenges facing the economy, according to IMF spokesman Gerry Rice.

But Rica added that "any decisions on debt are the authorities’,” to be made in consultation with their own legal and financial advisors," Rice said.

The meeting, chaired by President Michel Aoun, was held in the presence of Defense Minister Zeina Akar"

A meeting to discuss the financial crisis is attended by defense minister???

She is Aouni so it's justified.

A government of crooks and beggars, next please.

20 years too late for ongoing crisis.