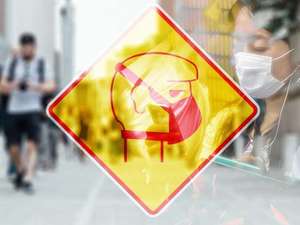 As the death toll in China from the new COVID-19 coronavirus goes beyond 1,360, senior party officials in Hubei province and Wuhan, where the virus emerged in December, have been sacked.

Here are the latest developments in the coronavirus crisis.

It comes after authorities broadened their definition for infection to include people "clinically diagnosed" via lung imaging.

Authorities sack the top political leaders of Hubei province and Wuhan, the highest profile figures to be removed in a purge over the way the outbreak has been handled.

A top Red Cross official in Wuhan has also been fired for dereliction of duty and health officials removed in other cities.

Vietnam becomes the first country outside China to impose a mass quarantine, confining more than 10,000 people to six villages near Hanoi for 20 days.

Checkpoints are set up around the villages that make up Son Loi after the health ministry reports six infections there.

Another 44 people on board a quarantined cruise ship off Japan's coast have tested positive, the health minister says, taking the number to 218.

Thousands of people onboard the Diamond Princess are under quarantine until February 19, although Health Minister Katsunobu Kato says some elderly passengers will be allowed off if they test negative.

The U.S. cruise ship Westerdam is finally given permission to dock in Cambodia, having been turned away from several Asian ports over concerns that a passenger could be infected.

This ship is to dock early Friday in Sihanoukville and passengers will be transferred directly to the airport to fly to Phnom Penh and onward.

The world's top mobile telephone trade fair, the annual World Mobile Congress, is cancelled after fears stemming from the coronavirus spark an exodus of industry heavyweights.

The event had been planned to run in Barcelona from February 24 to 27.

The organizing GSMA mobile trade association says "the global concern regarding the coronavirus outbreak, travel concern and other circumstances, make it impossible" for it to go ahead.

Rugby's Hong Kong and Singapore Sevens events are pushed back from April to October, becoming the latest sporting casualties of the virus.

"The health and safety of our players, fans and everyone working on the event is always our highest priority," World Rugby says.

The announcement comes a day after Formula One's Chinese Grand Prix in Shanghai, scheduled for April 19, was postponed.

A major sports conference scheduled for Beijing is another casualty. Organizers are looking for an alternative venue for the SportsAccord World Sports and Business Summit 2020, originally set for Beijing in April.

The International Energy Agency warns that global oil demand will suffer its first quarterly drop in a decade as the COVID-19 virus lashes the economy in China and its impact ripples throughout the world.

"Demand is now expected to fall by 435,000 barrels year-on-year in the first quarter of 2020, the first quarterly contraction in more than 10 years" when it dropped during the global economic crisis, it says.