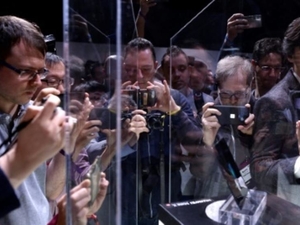 Cancel, delay or go ahead: the organizers of industry events are faced with a difficult choice as international gatherings of thousands or even of tens of thousands of people pose a risk of spreading the COVID-19 virus.

The cancellation of the Mobile World Congress due to have been held in Barcelona later this month shows the event organizers are under intense pressure.

The three-day Barcelona gathering is usually a must on the tech calendar, attracting some 110,000 visitors -- including several thousand from China -- and 2,800 firms.

The cancellation is a blow to the event sector which employs some 1.3 million people worldwide and generates 137 billion euros ($150 billion) in direct spending according to exhibition industry association UFI, whose members run 32,000 events per year.

When it announced it the cancellation late on Wednesday, the GSMA mobile industry trade association said the decision was taken because of "the global concern regarding the coronavirus outbreak, travel concern and other circumstances, make it impossible for the GSMA to hold the event," organizers stated.

But organisers acknowledged Thursday that cancellation was the "only option" as major participants had forced its hand by pulling out.

By then, Facebook, BT, Cisco, Nokia, Amazon and Sony had all said they were skipping the event.

"We looked at the data and yesterday we concluded that the vast majority of those who planned to attend were not going to be there," GSMA chief executive John Hoffman told a press conference in Barcelona on Thursday.

- Need to be reassured -

The Barcelona cancellation came after a number of events in Asia, including the Basel festival of contemporary art which Hong Kong had been to host in March and a business aviation symposium slated for Shanghai in April.

Elsewhere in Europe, Swatch Group also called off its watch fair in Zurich, and Russia scotched an investment forum in Sochi.

François-Henri Pinault, CEO of luxury group Kering, noted ahead of the Milan and Paris fashion weeks that "we shall have many less people coming to shows -- Chinese sector professionals and influencers are not going to come."

The risk of the new coronavirus now known as COVID-19 by mingling of people at conferences and trade fairs is not hypothetical.

A British businessman who became known as a "super-spreader" of COVID-19 picked up the virus at a sales conference in Singapore in January.

Moreover, as the virus is believed to be able to spread before those infected show symptoms, heightened security measures may not prove effective.

The GSMA had pledged to take extra measures to ensure the health of participants and the Spanish government and local authorities had made repeated assurances that the health risk was low.

Yet the conference's major participants pulled out.

"For the time being, the priority is to reassure parties concerned," said Fabrice de Laval, head of legal affairs at Unimev, the French trade fair industry association.

He said if a virus case ever emerged at an event, "we would move into crisis mode with reinforced precautionary measures," such as limiting access.

"The new coronavirus poses a challenge for the months ahead," said UFI director general Kai Hattendorf, while adding the sector is "resilient".

GL Events, which organizes salons in some 20 countries, has cancelled three scheduled for Beijing at the behest of Chinese authorities.

"China's presence in international salons is today much larger than during the SARS epidemic" of two decades ago, hence the larger impact, said the company's managing director for events and exhibitions, Philippe Pasquet.

"In the end, everything will depend upon the length of the epidemic. For now, we don't think it will go on but we are remaining cautious," said Pasquet, adding he fears "not so much the virus but the psychosis bound up with the epidemic."