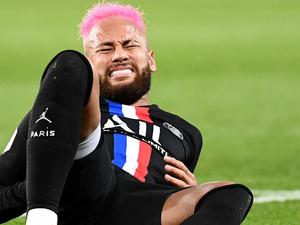 The world's most expensive player has missed three matches having been sidelined with a rib injury since the victory over Montpellier on February 2.

"I can't say that he will be 100% to play against Borussia Dortmund," Tuchel said after the 6-1 French Cup quarter-final hammering of Dijon.

PSG will wait until the last possible moment before making a decision on the Brazilian's chances of facing Amiens in Ligue 1 at the weekend.

"We will discuss and decide on Friday, the latest possible time to do so. We can't risk his fitness," Tuchel added.

The 28-year-old Neymar, who joined PSG in 2017 for 222 millions euros ($250 million at the time) missed last season's defeat to Manchester United at the same stage of the Champions League with a foot injury.

"We aren't going to take risks against Amiens, it's clear. We will have a strong team, but if we have little doubts, we won't take risks," Tuchel said.

The Parisians have never got further than the quarter-finals in the Champions League and travel to Dortmund on Tuesday for the first leg of the last 16 clash.