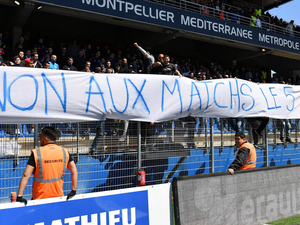 France's National Assembly voted on Thursday to ban professional football matches on May 5 in homage to the victims of the Corsican stadium disaster.

In 1992, a stand collapsed at Bastia's Furiani stadium just before their French Cup semi-final against Marseille, killing 18 people and injuring more than 2,300.

For more than 25 years, organisations representing victims and their families have been calling for a ban on matches on the anniversary, in the face of the opposition from the French league and the French football federation, who were concerned about the scheduling of their competitions.

Led by Corsican deputy Michel Castellani, the bill was adopted at first reading, by 85 votes to one. It must now be ratified by the Senate.

The only vote against came from Anne-Christine Lang, of President Emmanuel Macron's La Republique En Marche party, who said it was not up to MPs to "legislate on emotion".

The proposed law would ban professional matches on May 5 and require teams in amateur games on May 5 to observe a minute's silence and the wear black armbands.

In July 2015, then Secretary of State for Sports Thierry Baillard introduced a freeze on matches when May 5 fell on a Saturday.