Aoun Urges Ministers to Devise Emergency Plan, PM Asks Them Not to Run in Elections 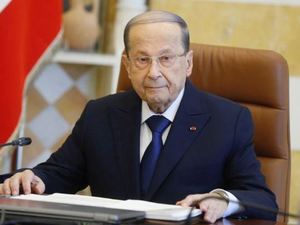 President Michel Aoun on Thursday called on ministers to “work in a rapid pace amid all the extraordinary economic, financial, monetary and banking circumstances that we are going through.”

The president also asked ministers to “start preparing the draft 2021 state budget so that it takes it course within the specified constitutional deadlines.”

Prime Minister Hassan Diab for his part asked ministers to “prepare files listing the urgent and necessary projects that should be discussed during foreign trips or with Arab and foreign officials when they visit Lebanon, as well as with the donor parties,” telling them that the files should be ready by next week at the latest.

He also asked them to “sign pledges not to run in parliamentary elections should the polls be held under the supervision of the current government, in line with the articles of the Policy Statement.”

LOL what a show.... how naive and dumb do Aoun and Diab believe people are?

Never has Lebanon known or seen a president who likes to devise emergency plans as much as this one, ever!

Maybe he should apply the not running to ALL ministers and MP's that have failed the state for the last 30+ years including himself and the MANY MANY others.