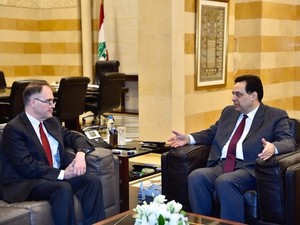 The Registrar of the Special Tribunal for Lebanon (STL) Daryl Mundis met with Prime Minister Hassan Diab on a working visit to Beirut this week, the STL said on Friday.

"This mission is part of regular visits the Registrar undertakes to update the Lebanese officials on the work of the Tribunal," it said.

The Registrar is responsible for all aspects of the STL's administration including the budget, fundraising, human resources and providing security. His responsibilities also include court management, oversight of the Victims' Participation Unit, witness protection and language services.

A massive suicide bomb tore through ex-PM Rafik Hariri's armored convoy on the Beirut seafront on February 14, 2005, killing him and 22 other people.

The U.N.-backed Special Tribunal for Lebanon has tried four Hizbullah operatives in absentia over the crime and the verdicts are expected to be issued later this year.

Hizbullah has denied involvement in the case, describing the tribunal as a U.S.-Israeli scheme and vowing that the accused will never be found.

Under no condition we want any cent given to Hizbollah's government. Not before honest and courageous economic experts explain why Lebanon's that had 6% GNP growth prior to Hizbollah War, a country with the best talents, incredible human resources and brilliant worldwide expatriates end up bankrupt. Corruption that always was there played a minuscule role compared to Hizbollah's major role in destroying our economy, scaring away all western firms, and made Lebanon an attack dog for Iran nuclear policies creating political instability that made impossible any long term investment. We are under occupation and federalism looks now the best option to liberate Lebanon, save freedom and democracy, and create a prosperous future for our children.

Indeed. So many unanswered questions. When will the Lebanese authorities at last dare to catch the 4 Hizbullah criminals indicted by the STL, and hand them over to the Tribunal ?