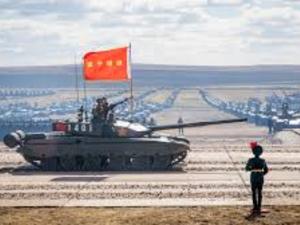 Global spending on defense rose by four percent in 2019, the largest growth in 10 years, led by big increases from the U.S. and China, a study said Friday.

Both China and the U.S. increased spending by 6.6 percent, the report said, while Europe -- driven by ongoing concerns about Russia -- stepped up by 4.2 percent.

But this growth only brought European defense spending back to levels seen in 2008, before the global financial crisis saw budgets slashed.

European NATO members have been seeking to increase spending to placate President Donald Trump, who has repeatedly accused them of freeloading on the U.S.

Trump has railed at European allies, particularly Germany, for not living up to a 2014 NATO pledge to spend two percent of GDP on defense.

The mercurial president's anger over spending has fueled concern about his commitment to the transatlantic alliance, culminating in an explosive 2018 summit where he launched a blistering public attack on Germany in a televised meeting with Chancellor Angela Merkel.

If France stops trying to invade the world, will AFP lose a third of its budget which is paid by the French government?
What will Naharnet.com do if AFP shuts down? Well, maybe AFP will just cashier the third of its staff concerned with camouflaging French imperialism.

https://www.thebalance.com/u-s-military-budget-components-challenges-growth-3306320
By Kimberly Amadeo
Updated February 13, 2020
Estimated U.S. military spending is $934 billion. It covers the period October 1, 2020, through September 30, 2021.1﻿ Military spending is the second-largest item in the federal budget after Social Security.
This figure is more than the $705 billion outlined by the Department of Defense alone2﻿. The United States has many departments that support its defense. All these departments must be included to get an accurate picture of how much America spends on its military operations.

The Four Components of U.S. Military Spending
If you really want to get a handle on what the United States spends on defense, you need to look at four components.
First is the $636 billion base budget for the Department of Defense. Second is $69 billion in overseas contingency operations for DoD to fight the Islamic State group. These two, added together, total the $705 billion budgeted by the DoD.
Third is the total of other agencies that protect our nation. These expenses are $228 billion.3﻿ They include the Department of Veterans Affairs ($105 billion). Funding for the VA has been increased by $20 billion over 2018 levels. That's to fund the VA MISSION Act to the VA's health care system. The other agencies are: Homeland Security ($50 billion), the State Department ($44 billion), the National Nuclear Security Administration in the Department of Energy ($20 billion), and the FBI and Cybersecurity in the Department of Justice ($9.8 billion).4

Now China has several police and military forces. I wonder if anybody knows how much it spends on defense all told.

In all this defense spending there is plentiful room for self-interest and paranoia/racism/xenophobia to camouflage actual costs and actual needs. Which is how it always was but now we have global transparency and we can all see that there is no evil barbarian hiding outside the gates. We can see the US military in 140 countries at the moment. We can see the US defense budget promising to maintain "global dominance".
"Efforts funded apply to the Obama administration's refocusing of the US military to Asia, identifying investments to 'sustain and advance [the] DoD's military dominance for the 21st century', counter the 'technological advances of U.S. foes',[39] and support Manufacturing Initiative institutes. (Wiki) That is the Defense Dept.'s own words.

How many times has China tried to invade the US and/or Europe?