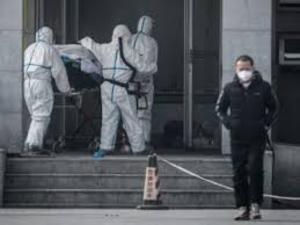 Six medical workers are among the latest victims in China of the novel coronavirus as the death toll nears 1,400. Here are the latest developments.

The death toll from China's epidemic nears 1,400, according to authorities, with six medical workers among the victims.

Nearly 64,000 people are now recorded as having fallen ill in China.

Officials reveal that 1,716 health workers had been infected as of Tuesday, underscoring the risks doctors and nurses have taken due to shortages of protective gear.

Japan reports its first death of an infected person -- the third fatality outside mainland China after the Philippines and Hong Kong.

More than 500 people have now been contaminated in around 30 countries outside China, which includes the autonomous territories of Hong Kong and Macao.

After initially praising Beijing for its response to the virus, Washington says it feels let down by a lack of transparency from China.

China has defended its record on transparency towards the international community in its response to the spread of the new virus.

The Japanese authorities start evacuating a quarantined cruise ship off Japan's coast, letting 11 passengers aged 80 and over or in poor health off the Diamond Princess who have tested negative for the virus.

More than 200 people on board the ship, the biggest center of the virus outside China, have been diagnosed with the virus since it arrived off Japan on February 3 and was placed in quarantine.

The first French nationals repatriated from China and placed in quarantine leave the center near the southern city of Marseille where they have been confined since January 31 after returning from Wuhan, Chinese epicenter of the virus.

The 181 people concerned are given certificates saying they are not contagious.

The outbreak could mean a reduction of $4-5 billion in worldwide airline revenue, the International Civil Aviation Organization (ICAO) says.

The U.N. agency reports that 70 airlines have cancelled all international flights in and out of China and 50 others have reduced their operations.