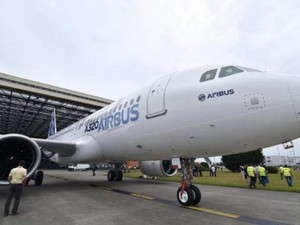 European aerospace giant Airbus said on Saturday it "deeply regrets" Washington's move to increase tariffs on its planes imported into the United States from Europe.

Friday's decision to hike tariffs to 15 percent from March 18 "further escalates trade tensions between the US and the EU", the company said in a statement.

This creates "more instability for US airlines that are already suffering from a shortage of aircraft".

The duties have been at 10 percent since October, when Washington slapped tariffs on $7.5 billion of European products.

Airbus said the latest decision also "ignores the many submissions made by US airlines, highlighting the fact that they -– and the US flying public -– will ultimately have to pay these tariffs".

The office of the United States Trade Representative made the tariff announcement just days after President Donald Trump said it was time to talk "very seriously" about a trade deal with the European Union.

Washington imposed punitive taxes on the $7.5 billion in European products after the World Trade Organization (WTO) gave the United States a green light to take retaliatory trade measures against the EU over its subsidies to Airbus.

Other products -- including wine, cheese, coffee and olives -- have been taxed at 25 percent since October.

"Airbus will continue its discussions with its US customers and work with them to mitigate effects of tariffs insofar as possible," the company statement said.

"Airbus has and will continue to push for a negotiated settlement to this 15-year-long dispute," it said noting that the "further escalation complicates efforts to find a negotiated outcome to this dispute".

Airbus added that it hopes Washington's position will change  "especially when the WTO will authorize the EU to impose tariffs on Boeing aircraft, including the 737Max, 787 and 777 aircraft in the May/June timeframe".

After a trade war with China that lasted nearly two years, Trump has now turned his sights to Europe.

WTO, you know, you could have an international organization with those initials, standing for World Trade Organization, where states discuss trade law.
Does the US subsidize Boeing by buying military gear it does not need, not to mention military gear whose use is itself a crime in every case these days?
If Trump is serious about the economy, he could take a nine-hundred-billion dollar burden off the US economy by shutting the Pentagon. Even just saying that you can feel the weight being taken off the global economy and the people's hopes.