Larijani in Beirut for Senior Talks 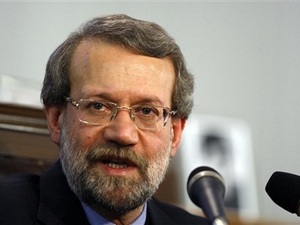 Leading a delegation of lawmakers and politicians, Iranian parliament speaker Ali Larijani arrived in Beirut on a two-day visit to meet with senior Lebanese officials.

Upon his arrival at the Rafik Hariri International Airport late on Sunday, Larijani praised relations between the two countries.

“As you all know Iran is always striving to see brethren Lebanon a free and independent country,” said Larijani, as he congratulated Lebanon on the formation of a new government.

“We will always strive for excellent bilateral relations between the two brotherly countries," he told reporters.

The boss has come to inspect the factory workers.

Larjani dégage ! You’re not welcome here. Go back to your stinky country.