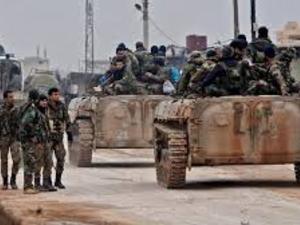 The Syrian army has discovered a mass grave containing around 70 bodies in a former rebel bastion near Damascus, the state news agency reported Monday.

SANA said the victims found in the Eastern Ghouta region were "civilians and security personnel who were executed by terrorist groups".

The densely populated semi-urban area just east of Damascus was controlled by rebel and jihadist factions for around six years until government forces retook it in 2018 after a long and bloody siege.

The state news agency quoted a senior police officer as saying that the killings were believed to have taken place between 2012 and 2014.

The mass grave, near Eastern Ghouta's main town of Douma, is in an area formerly controlled by rebel group Jaish al-Islam.

The siege of Eastern Ghouta ended with a devastating regime offensive that saw at least 1,700 civilians killed before a deal was struck that saw fighters and civilians evacuated to northern Syria.

According to the officials quoted by SANA, many of the victims, among them a women, had been bound and executed with a gunshot to the head.

AFP was not immediately able to verify the information provided by the state news agency.

Swathes of Eastern Ghouta were completely leveled during the siege and the regime offensive, but some residents have returned despite the lack of reconstruction.

Many mass graves have been found in Syria in recent years, mainly in areas formerly controlled by the Islamic State jihadist group.

According to the Syrian Observatory for Human Rights, more than 380,000 people have been killed since the start of the war in 2011.

Thousands are still missing and Human Rights Watch last week encouraged the authorities in Syria to investigate their fate.