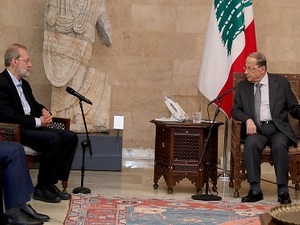 During the meeting, Larijani congratulated Aoun on the formation of the new government and wished it “success in enhancing stability and security in the country,” expressing Iran’s willingness to “help improve the economic situations in Lebanon.”

NNA said Aoun and Larijani also “evaluated the current regional situations and the developments of events in Syria and the region.”

“They also tackled the situations of Syrian refugees in Lebanon and the need for their return to their country after stability and security returned to most Syrian regions,” the agency added.

The president also discussed with Larijani the situations in Iran, NNA said.

Larijani had arrived in Lebanon overnight for talks with the country’s top leaders.

The new Lebanese government was born after weeks of negotiations over its line-up, including with Iran-backed Hizbullah.

Tehran has already expressed willingness to assist Lebanon's economy, including by supporting the moribund electricity sector.

The lack of electricity and other basic services was one of the reasons why protesters of all ages, sects and regions took the streets in mid-October to demand the wholesale removal of a political elite they see as corrupt and incompetent.

Offers of support from Iran -- itself in a difficult economic situation due to Western sanctions -- are met with suspicion among Lebanon's deeply divided ruling class.

"Iran's cash can help resolve the crisis of a party but not that of a country," Saad Hariri, who resigned as prime minister under pressure from the street last year, said on Friday.

To rescue the country's economy, the new government has requested the advice of the International Monetary Fund on what measures to take.

The next major date in Lebanon's economic calendar is March 9, when a $1.2 billion Eurobond is due to mature.

Lebanon can either try to restructure its debt, repay the Eurobond -- but the cash-strapped state can scarcely afford to -- or default on its debt.

Were saved lol. This iranian terrorist should not even be welcomed in lebanon

We’re not interested in having ریال ایران in the Banque du Liban.
Keep your worthless Monopoly money to yourself.

Press on Jawad's pic in the link above to see he is wearing a T-shirt that says " Timberland -USA" and his resisting father is calling for the boycott of American goods:)

what is there to say?!

He’s obese yet most Lebanese are starving ... now we know where the money went.

your country is in a economical crisis, and the economy is shrinking and you pretend to help lebanon? help your country first.....

Exactly.
This is a com operation.
They are on the verge of an economical collapse in Iran.
This is only a way for them to show the Ebola partisans in Lebanon that Iran stands by them... but it obviously is a scam. They have no means to help us.

When the IMF and the world Bank intervene, the USD-Lebanese Pound exchange rate will be de- pegged and then you will see the exchange rate jump immediately to 5,000 L.L if not more. It is just a matter of time....

The dollar is not going anywhere before the BDL forces the depositors to sell their dollars @1,500 and then, then, the governor Riad Salameh will let go the lid off the USD as he should have done years ago, and who the hell knows how much it will reach!

This throwback wants to help Lebanon while his own country is in a similar path onto economic collapse. Notice how all totalitarian governments spend their entire cash on building their military nd funding militias groups around the world while their population starve. This has only only ending.

Put Iran to the test and see if they can deliver. No price to be paid by Lebanon, in return.

LOL---the Iranians requested money from the Russians to build a power plant. How oo they 'magically' have the ability to fix this decepid electricity sector. It will need a lot of money and management---2 things the Iranians do not have.