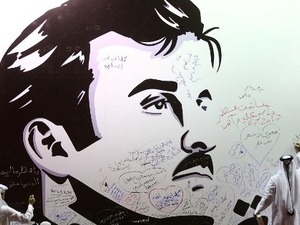 Qatar should scrap several laws which impede free speech and expression, the EU's human rights envoy said on Monday at an event in Doha promoting the online rights of activists.

Rights groups frequently criticize authorities for encouraging self-censorship among publishers, particularly on LGBT issues and security matters which have undergone global scrutiny as Qatar prepares to host the 2022 World Cup.

"I am concerned about some pieces of legislation which relate to freedom of expression and freedom of the press," said the European Union's special representative for human rights, Eamon Gilmore.

He highlighted the 1979 press law which governs the licensing of printed material and allows officials to demand corrections to news stories.

Publications can be suspended under the law for up to three months for printing items deemed against the public interest.

Gilmore said he had raised the concerns with the foreign affairs ministry and the National Human Rights Committee which is staging a two-day conference on "Challenges and ways to promote freedoms and protect activists".

"Freedom of expression is a very important part of the way in which the European Union sees human rights. We attach a very high priority to it," he said.

The EU delegation also raised concerns about a cybercrime prevention law passed in 2014 which carries a three-year sentence for anyone convicted of establishing a digital platform for "fake news."

However no definition of what constitutes "fake news" is given in the act.

The penalty was recently increased to five years in cases where "ill intent" could be proved.

"We urge that those laws be amended, changed or withdrawn," Gilmore said.

The laws were also flagged as problematic during Qatar's most recent Universal Periodic Review, the scrutiny process which all 193 UN countries must undergo approximately every four years, he added.

Independent U.N. experts have previously warned that Qatar's strict "lese majeste" laws, which prohibit disrespect of the ruler or other officials and carry custodial sentences, could amount to arbitrary detention because they violate free speech rights.

"It appears to be rarely used in practice, the working group nevertheless calls for the provision to be repealed," the experts said during a working visit to Qatar in November.

U.N. experts are independent and do not speak for the world body, but their findings can be used to inform the work of UN organisations including the rights council.

They simply bought a world cup now you want them to free will and play by the rules?

As Groucho the First (aka, Groucho the Great) said, "who you gonna believe, Al Jazeera or your own eyes?"