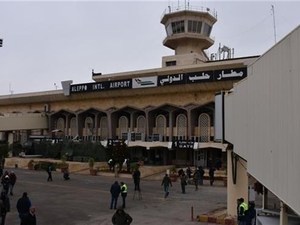 The airport in Syria's northern hub of Aleppo is to reopen to civilian flights this week for the first time since the war forced its closure in 2012, state media said Monday.

The first flight -- from Damascus to Aleppo -- is scheduled for Wednesday, with more flights to Cairo and Damascus lined up in following days, it said.

The announcement comes days after Damascus secured the perimeter around Aleppo during a broad offensive against rebels in the north of the country.

The assault, which has displaced more than 800,000 people in less than three months, allowed the government to secure the M5 highway connecting Aleppo to Damascus.

Civilian flights had stopped completely at Aleppo airport when rebels fighting to topple President Bashar al-Assad seized control of large parts of the city in 2012.

Trial flights took off from Aleppo in 2017, days after the end of a devastating siege that ended rebel groups' hopes to taking over Syria's second city.

With its troops engaged on several fronts, the government took time to secure areas around Aleppo and to reopen trade routes from the city.

Regime forces are still sweeping areas west of Aleppo from which rebels have chronically fired rockets at the city.