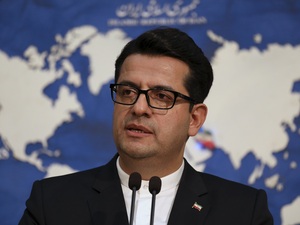 An Iranian man arrested in Germany on suspicion of violating U.S. sanctions returned home Monday after being released, the foreign ministry said.

Ahmad Khalili had been detained "on the pretext of violating the illegal and cruel sanctions of the United States", ministry spokesman Abbas Mousavi said.

He did not specify when Khalili was arrested or give details on his identity.

Khalili was freed on Sunday night after "intensive diplomatic consultations" and cooperation involving the judiciary and the Revolutionary Guards' intelligence service, Mousavi said in a statement.

He returned to Iran together with Foreign Minister Mohammad Javad Zarif, who last week attended a security conference in the German city of Munich, the spokesman said.

Iran said in December it was ready for more prisoner swaps with the U.S. after it secured the return of scientist Massoud Soleimani in exchange for Xiyue Wang, a Chinese-born American held in the Islamic republic.

Decades-old tensions between Tehran and Washington have escalated steeply since 2018, when U.S. President Donald Trump unilaterally withdrew from the landmark 2015 Iran nuclear deal and reimposed sanctions.

Soleimani, a stem cell researcher at a Tehran university, on December 7, also flew back home from the United States with Zarif.