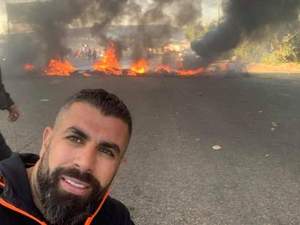 Mount Lebanon Examining Magistrate Bassam al-Hajj on Monday issued an indictment in the file of protest movement activist Rabih al-Zein and seven others.

The indictment says al-Zein “incited to the felony of the premeditated torching of banks.”

He was referred along with seven others to the Mount Lebanon Criminal Court.

Al-Hajj had issued an in-absentia arrest warrant for al-Zein in recent days.

he may have commited a criminal act and if so be judged ONLY if the white collars responsible of bringing lebanon to this financial catastrophe be judged too.. if not, we cannot call this justice.

This being said, he’s fishy.... and definitely politicized unlike the real demonstrators.