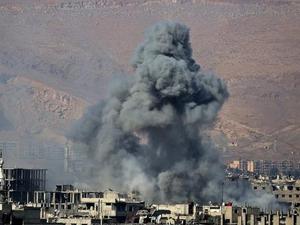 The UN High Commissioner for Human Rights on Tuesday called for the creation of humanitarian corridors in northwestern Syria, expressing horror at a Russian-backed regime offensive in the area.

Syrian troops are continuing an assault on the country's last major rebel enclave that has stoked fears of a humanitarian catastrophe as civilians flee.

"No shelter is now safe. And as the government offensive continues and people are forced into smaller and smaller pockets, I fear even more people will be killed," Michelle Bachelet was quoted as saying in a statement.

The statement said Bachelet was "horrified" by the unfolding humanitarian crisis.

"How can anyone justify carrying out such indiscriminate and inhumane attacks?" Bachelet said.

The United Nations estimates that the offensive in the Idlib region has displaced about 900,000 people since the start of December.

The area, including parts of neighbouring Aleppo province, is home to some three million people, half of them already displaced from other parts of the country.

Bachelet called on all parties to open humanitarian corridors for the safe passage of civilians, many of whom are stranded in rebel-held areas.

"They are now at a higher risk than ever, with little hope or guarantees for a safe and voluntary return to their areas of origin or areas of their choice," she said.

The UN said displacement camps were "overwhelmed by the sheer number of people seeking shelter" and many displaced "fearing for their lives have fled the camps".