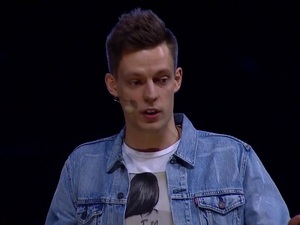 While much of the world is focused on the new coronavirus, Russia in recent days has seen a surge of interest in HIV testing, all thanks to a YouTube star.

Yuri Dud's video "HIV in Russia, the Epidemic No One Is Talking About," has racked up 13 million views since its release on February 11.

Popular among Russian youth, Dud, 33, has made a name for himself through interviews with politicians and celebrities.

The new film is only the second time he has touched on a sensitive subject after a documentary last year on Stalin's Gulag camps, a subject rarely discussed in Russia, that scored more than 19 million views.

His latest film also spotlights an issue that is often taboo, despite the hundreds of thousands of Russians infected with HIV.

"People living with HIV in Russia are constantly victims of discrimination," he says in the film, which talks about the daily lives of those infected, methods of transmission, treatment and prevention.

"We are ashamed of them, we run from them, we treat them with contempt."

As well as tackling myths about HIV -- like that it can be transmitted through mosquitoes or kissing -- he calls on viewers to be screened, noting that saliva tests are available in most pharmacies.

More than 1.1 million people are infected with HIV in Russia, out of a population of 144.5 million. At least 300,000 people have died from AIDS since 1987 and Russia has the third-highest rate of new infections in the world.

"And these new cases are the result of a lack of prevention and information," he said.

"We are not doing enough. You cannot only treat the sick," said Vladimir Mayanovsky, the head of a group representing people with HIV.

More than 90,000 people commented on Dud's video on YouTube, with many praising its bravery for tackling the subject.

"Where can we vote for this film to be shown in schools?" wrote one viewer, Nadia Khiakli.

In the days after its release, the number of Google searches for "buying an HIV test" jumped by 350 percent.

Russian authorities, which have been accused of downplaying the scale of the epidemic in Russia, showed new concern after the video became popular.

Kremlin spokesman Dmitry Peskov said the video "was worthy of interest" and the head of Russia's audit chamber, Alexei Kudrin, promised a study into the level of care provided to those infected.

Dud was even invited to parliament and the hour-and-50-minute film was shown in the lower house State Duma on Friday, though few deputies attended.

Experts said the reaction in recent days has been at odds with official attitudes towards HIV.

"In the minds of the people who make decisions in Russia, HIV is about drug users or people who live the 'wrong lifestyle'," said Igor Pchelin, the head of the Steps anti-AIDS foundation.

Russia under President Vladimir Putin has taken a conservative approach to HIV that favors abstinence, whether for sex or drug use.

Influential Moscow daily Vedomosti wrote that Dud was proving "more effective" than the government in addressing the issue.

"New people have gone to be tested. There is even interest among decision makers, this is good!" said Pokrovsky of the Federal AIDS Center.