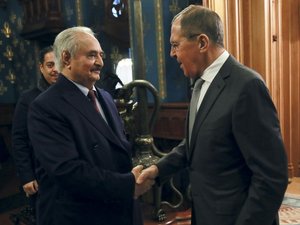 Shoigu and Haftar discussed the situation in Libya and "the important role of talks" held in Moscow in January as well as "the need to fulfil" terms agreed at an international summit in Berlin later last month, Moscow said.

The statement did not say where the meeting took place.

It came after Libya's UN-backed government announced late Tuesday it would halt its participation in talks aimed at brokering a lasting ceasefire between warring sides in the conflict.

This move came after a barrage of rocket fire hit a port in the capital Tripoli -- the target of a months-long campaign by Haftar to oust the Government of National Accord (GNA).

Haftar and Shoigu "once more noted the lack of an alternative to political ways of resolving the intra-Libyan crisis" and their commitment to Libya's "independence, unity and territorial integrity," the Moscow defence ministry statement said.

Russian Foreign Minister Sergei Lavrov said Wednesday that outside players should push both sides in Libya to sit down for peace talks.

"All those who in one way or another influence political or other forces in Libya should stimulate them to sit down for talks. The first steps in this direction were taken but now additional difficulties are coming up again," Lavrov said while meeting his Jordanian counterpart Ayman Safadi in Moscow, RIA Novosti news agency reported.

Haftar, who is backed by Russia as well as the United Arab Emirates, Saudi Arabia and Egypt, came to Moscow for talks in January but left without signing a ceasefire agreement.

A tenuous truce came into effect in January, brokered by Russia and Turkey, which supports the unity government in Tripoli.