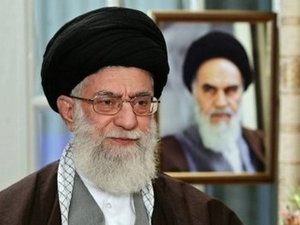 A wave of uprisings in Arab countries is a sign of an "Islamic awakening" which was envisaged when the 1979 Iranian revolution took place, Iran's supreme leader Ayatollah Ali Khamenei said on Friday.

"Today's events in North Africa, Egypt and Tunisia and some other countries have different meanings for us," Khamenei, the commander-in-chief and spiritual guide of Iran, said in a sermon at Tehran university during the Muslim weekly prayers.

"This is what was always talked about as the occurrence of Islamic awakening at the time of the Islamic revolution of the great Iranian nation and is showing itself today."

Khamenei's remarks were received by cheering crowds of worshippers who, raising their hands, chanted "Death to America! Death to Israel!"

The sermon marked the first time in seven months that Khamenei has addressed the weekly Friday prayers and came as protesters were massing in Egypt for sweeping "departure day" demonstrations to force President Hosni Mubarak to quit.

Top Iranian officials have backed the revolt in Egypt and have warned Tehran's arch-foe Washington against "interfering" in the what they say is a movement of the people.