UN Appeals to Turkey to Take in More Syria Refugees 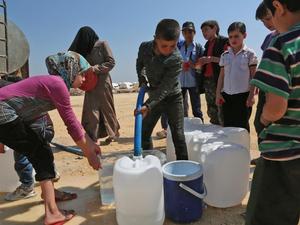 The UN refugee agency on Thursday appealed to Turkey to take in more refugees from Syria, as hundreds of thousands flee the regime's brutal assault on the last rebel enclave.

"We need an end to the fighting, and access to safety to preserve lives," UNHCR chief Filippo Grandi said in a statement.

"I am also appealing for neighbouring countries, including Turkey, to broaden admissions, so that those most in danger can reach safety," Grandi said.

Turkey has said it is unwilling to open its borders to a new wave of Syrian refugees -- on top of the 3.6 million it has already taken in.

Grandi said "capacities and public support are already strained" in neighbouring countries and asked for more international support for governments taking in refugees.

The UN estimates more than 900,000 people have fled their homes or shelters in northwest Syria in the latest upsurge in violence -- the biggest wave of displaced civilians in the nine-year conflict.

Most of them are now in Idlib and Aleppo governorates, where freezing conditions are creating a grave humanitarian situation.

Grandi said 80 percent of the displaced people were women and children and underlined the importance of safe humanitarian access to them.

UNHCR has stocks in the region to meet the immediate needs of up to 2.1 million people, including tents for 400,000, Grandi said, pointing out that there were an estimated four million civilians in the region.

"Thousands of innocent people cannot pay the price of a divided international community, whose inability to find a solution to this crisis is going to be a grave stain on our collective international conscience," Grandi said.

According to the British-based Syrian Observatory for Human Rights, the regime offensive has killed more than 400 civilians since it began in December, adding to the toll of more than 380,000 who have died in the conflict.