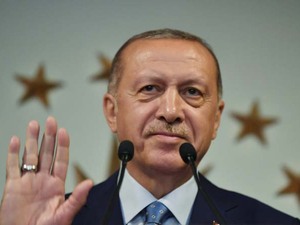 President Recep Tayyip Erdogan on Tuesday said there was not yet a full accord between Russia, and European Union heavyweights France and Germany to hold a summit over the escalating violence in Syria's Idlib.

"There is no full agreement" between French President Emmanuel Macron, German Chancellor Angela Merkel and Russian leader Vladimir Putin, he told reporters in a televised press conference before travelling to Azerbaijan.

Erdogan on Saturday announced he would hold a four-party summit with the leaders of Russia, France and Germany on March 5.

However, the Turkish leader on Tuesday said he might instead hold face-to-face talks with Putin on March 5, either in Istanbul or in Ankara.

Turkish troops have come under deadly fire from Syrian government forces this month in the northwestern Idlib province -- the last rebel enclave.

The clashes have prompted negotiations between Turkish and Russian delegations in Moscow and in Ankara which have so far proved fruitless.

Erdogan said a Russian delegation would come to Turkey on Wednesday for another round of talks.

A months-long offensive by Russia-backed Syrian troops against rebels backed by Turkey in Idlib has seen hundreds of thousands of people flee the violence.

The United Nations warned on Monday against an imminent "bloodbath" as the fighting in Idlib was coming "dangerously close" to encampments holding around a million displaced people.