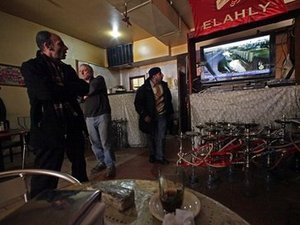 Thousands more flowed over bridges across the Nile into Tahrir Square, a sign that they were not intimidated after fending off everything thrown at the protesters by pro-Mubarak attackers — stones, firebombs, fighters on horses and camels and automatic gunfire. The protesters passed through a series of beefed-up checkpoints by the military and the protesters themselves guarding the square.

The crowd, well over 10,000, was the biggest since Tuesday, when a quarter-million turned out. They chanted, prayed and unfurled a long banner in the national colors of red, black and white. A man sitting in a wheelchair was lifted — wheelchair and all — over the heads of the crowd and he pumped his arms in the air.

Egyptian Defense Minister Hussein Tantawi and senior army officials visited the square Friday morning and soldiers were checking IDs and performing body searches at its entrances, a sign that Egypt's most powerful institution was sanctioning the demonstration. Protesters labeled the rally the "day of leaving," a reference to their demand Mubarak go on Friday.

The Obama administration said it was in talks with top Egyptian officials about the possibility of Mubarak immediately resigning, and an interim government forming before free and fair elections this year.

U.S. officials said the creation of a military-backed caretaker government was one of several ideas being discussed between the Egyptian regime and the Obama administration.

Among the options was a proposal for Mubarak to resign immediately and cede power to a transitional government run by Vice President Omar Suleiman, the officials said.

Prominent reform advocate Mohamed ElBaradei called on Mubarak to "hear the clear voice coming from the people and leave in dignity."

"The quicker he leaves in dignity the better it is for everybody," said ElBaradei, a Nobel Peace laureate who has become one of the leaders of Egypt's protest movement. He told reporters Friday that there should be a yearlong transition to democracy under a temporary constitution with a presidential council of several people, including a military representative.

The atmosphere was peaceful after the 48 hours of violence between pro- and anti-Mubarak crowds battling with rains of stones broken out of the street and shields fashioned out of sheet metal from a construction site. Gangs backing Mubarak attacked journalists and human rights activists across Cairo Thursday, while others were detained by soldiers.

On Friday morning, human chains of protesters performed secondary searches inside Tahrir Square. Many of those arriving brought fresh bread, water, fruit and other supplies, and the atmosphere was relaxed. Long lines formed at tables of people handing out tea and bread.

Around the square were makeshift clinics, set up in the entranceways of stores, including a KFC. At one, a man received an injection in his arm. Above another was the sign of an interlocking crescent and cross.

The pro-Mubarak crowds that have attacked demonstrators and foreign journalists did not have a visible presence.

Ayman Nour, a former presidential candidate who is a member of a new committee formed by various factions to conduct any future negotiations on the protesters' behalf once Mubarak steps down, said that he hopes the demonstration "leads to Mubarak's departure."

"The chaos is organized by his ruling party," Nour said. "There is a fifth column inside the regime that led the looting and violence."

Suleiman said Thursday said he had invited the fundamentalist Muslim Brotherhood into negotiations over Egypt's future and the transition to democracy — a stunning concession to a group that the regime considers its worst enemy and has cracked down on ferociously in the past years.

The Brotherhood has rushed to take a stronger role in the unprecedented protests that erupted 10 days ago, led by more secular young activists demanding the ouster of Mubarak. The Brotherhood's strength was on display in the pitched battles in Wednesday and Thursday against government supporters who attacked the protesters' camp in Cairo's central Tahrir Square before they were driven from the square by the pro-democracy forces.

Brothers — distinguishable by their close-cropped beards — dominated the front lines, often lining up to pray for "victory or martyrdom," before throwing themselves into the fray, hurling stones, sticks and firebombs at the attackers while shouting "God is great."