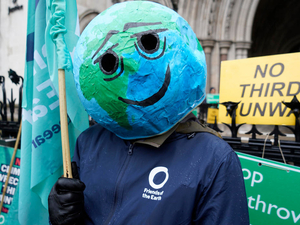 Britain's Court of Appeal on Thursday ruled in favor of environmental campaigners who oppose the building of a third runway at London's Heathrow airport, Europe's busiest.

The court said the UK government -- which approved the Heathrow extension in 2018 after years of delays-- had failed to take into account commitments to the Paris Agreement on limiting global warming.

In reaction, triumphant campaigners called on Prime Minister Boris Johnson -- who in 2015 pledged to lie in front of bulldozers to stop Heathrow's third runway for both environmental and aesthetic reasons -- to finally cancel the project.

The legal action against the approval was brought by various London councils, environmental groups including Greenpeace and Friends of the Earth, and London Mayor Sadiq Khan. They lost at an original hearing in May.

Presenting a summary of the appeal ruling, judge Keith Lindblom said that two years ago, the government of prime minister Theresa May had given no explanation of how it took into account the 2015 Paris accord -- which seeks to cap global warming to less than two degrees Celsius from pre-industrial levels -- on building the new runway.

The current Conservative government has decided not to appeal the ruling at London's Supreme Court.

However, Johnson, who has in recent times appeared ambiguous over his once-staunch opposition to the project, may still have to make an official decision on scrapping it.

Notably, Heathrow airport -- which is owned by a consortium led by Spanish construction giant Ferrovial -- said it would appeal Thursday's ruling.

Heathrow, west of London, wants to increase its total capacity to 130 million passengers per day, compared with about 78 million currently.

"Expanding Heathrow, Britain’s biggest port and only hub, is essential to achieving the prime minister's vision of Global Britain," the airport said Thursday.

Johnson, who wants big infrastructure projects to help drive Britain's post-Brexit economy, earlier this month gave his backing to HS2 high-speed railway line that will link London with major cities in central and northern England -- even though construction will ravage ancient woodlands and wildlife.

While HS2 is projected to have a total bill greater than £100 billion ($129 billion, 118 billion euros) -- almost all of it at UK taxpayers' expense -- the Heathrow runway expansion was forecast to cost around £30 billion, funded almost entirely by the private sector.

"I'm delighted by the decision handed out by  the court of appeal," the London mayor told reporters outside the court.

"I've always said that we've got serious consequences about the government's plan to have a new runway at Heathrow because of the impact in the  climate emergency, on the air quality, on noise pollution (and) on the quality of life of Londoners."

"Really good news -- it's a fantastic victory -- we've been waiting for this day for many, many years," Sauven said outside the court.

"As part of the global campaign against climate change, this is really important ... Cancelling the third runway would send a really powerful message out to the rest of the world."

He added: "Boris Johnson should now put Heathrow out of its misery and cancel the third runway once and for all. No ifs, no buts, no lies, no U-turns."

Friends of the Earth climate campaigner Jenny Bates said that "it was basically a win on climate grounds."

"They knew they had to take climate into account and they didn't take the Paris accord into account," she said.

Building of the third runway had been expected to start in 2022 and take four years.