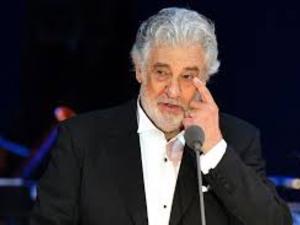 One of the world's most celebrated and prolific opera singers, Placido Domingo enjoyed a glittering six-decade career until a sexual harassment scandal brought down the curtain on his runaway success.

Dubbed "the king of opera", Domingo first rose to worldwide fame as one of the Three Tenors, his sonorous voice and commanding physical presence enchanting audiences across the globe.

The Spanish megastar also made a name for himself conducting and directing, taking on the top artistic positions at some of the world's most prestigious concert venues.

And this almost unrivaled position of power in the operatic world was, according to many of his accusers, what allowed him to pressure them into unwanted sexual relationships.

The allegations first surfaced in August last year and since then at least 20 women have come forward about incidents going back to the 1980s, with one saying Domingo put his hand down her skirt while others said he forcibly kissed them.

Although he brushed off the accounts as "inaccurate", insisting his interactions were "always welcomed and consensual," the damage was done.

Within two months, the charismatic tenor-turned-baritone stepped down from the Los Angeles Opera and withdrew from New York's Metropolitan Opera, effectively ending his U.S. career.

And this week, the storm reached Europe when the 79-year-old apologized for "the hurt" caused to his accusers, saying he accepted "full responsibility" for his actions, his mea culpa triggering a backlash in Spain and raising questions over future appearances in Europe.

On Thursday he attempted to row back on his apology, saying his words had been misunderstood.

Born in Madrid on January 21, 1941, Domingo's parents were both performers of traditional Spanish operetta, known as "zarzuela".

When he was eight, the family moved to Mexico where he studied music -- piano, conducting and eventually singing.

Starting out as a baritone, his teachers later advised him to move to the tenor range, but he would later return to his baritone beginnings in later years, his  dramatic tones leaving listeners spellbound.

At 16, he ran away and married a fellow student, angering his parents who were "furious, but even more sad," he told the New York Times. Although the relationship was short-lived, the couple had a son, Jose.

After intense training to hit the higher notes, Domingo took his first part at the age of 18 in the Mexico National Opera. And two years later, he made his debut in a leading operatic role as Alfredo in Verdi's "La Traviata" in Monterrey, Mexico.

In 1962, Domingo married Marta, his current wife with whom he had two more sons, Placido and Alvaro.

His international career took off in 1965 under conductors such as the Berlin Philharmonic's Herbert von Karajan and Italian great Claudio Abbado. In 1972, Domingo picked up the baton himself to conduct "La Traviata" at the New York City Opera.

He would go on to distinguish himself as a conductor across the world, and later moved to the United States to serve as director of the Washington National Opera from 1996 to 2001 before moving to the LA Opera.

But singing remained his first love.

The Three Tenors -- which also featured Jose Carreras and the late Luciano Pavarotti -- soared to worldwide popularity in the 1990s, bringing opera to a new generation of fans.

The trio wowed huge audiences from the Eiffel Tower to the pyramids of Egypt, and famously entertained fans with a concert in Rome on the eve of the football World Cup in 1990.

Even into his late 70s, Domingo has pursued a hectic musical schedule.

"If I rest, I rust," the silver-bearded singer is fond of saying, the phrase prominent on his official website, right next to his concert listings.

A fervent fan of Real Madrid football club, Domingo wrote a centenary anthem for the club in 2002.

Domingo has made more than 100 albums, picked up 14 Grammy awards and has been lavished with honors, including Spain's Gran Cruz de la Orden de Isabel la Catolica, the U.S. Presidential Medal of Freedom, Commandant of the Legion of Honor in France and Honorary Knight of the British Empire.

But the scandal has put the brakes on his seemingly unstoppable career, with the American Guild of Musical Artists this week saying an internal probe found Domingo had "engaged in inappropriate activity, ranging from flirtation to sexual advances".

As the culture ministry and other musical establishments sought to distance themselves from the singer, he himself saved other venues the trouble, withdrawing from all upcoming performances of "La Traviata" at Madrid's Teatro Real and pledging to do the same at any other venues "that might have difficulties" with his presence.