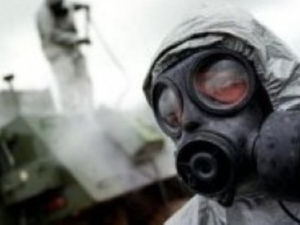 A Turkish official said Saturday that Turkey destroyed a chemical warfare facility in northwest Syria after dozens of its soldiers were killed by Syrian regime fire.

The Turkish army destroyed overnight "a chemical warfare facility, located some 13 kilometres south of Aleppo, along with a large number of other regime targets," the senior official told reporters on condition of anonymity.

The "regime targets" were about to be captured by Syrian/Hezbollah/Russian forces. Turkey has decided to cut its losses in its long-standing struggle to create a buffer-state in north Syria using takfiri infantry it bought from Qatar. Erdogan quipped to reporters, "These takfiris just can't take a missile hit."