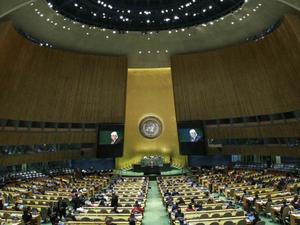 UN investigators warned Monday that Ankara might bear "criminal responsibility" for war crimes perpetrated against Kurds in northern Syria late last year, including the execution of a popular female politician.

The report comes as tensions soar between Turkey and Russian-backed Syrian forces following escalating clashes in the last rebel stronghold of Idlib, but is not directly linked to the latest unrest.

The UN Commission of Inquiry on the human rights situation in war-ravaged Syria said in its latest report that Turkey could potentially be held criminally liable for severe violations carried out by its allies, the Syrian National Army rebel fighters.

Turkish troops and their Syrian proxies have overrun a swathe of northern Syria since last October, after a deadly military campaign against Kurdish forces that caused tens of thousands to flee their homes.

In their report covering the period from July 2019 to January 10 this year, the UN investigators pointed to allegations by displaced Kurdish families and others that Ankara-backed Syrian rebels carried out executions, home confiscations and looting.

They pointed in particular to the case of Hevrin Khalaf, the 35-year-old secretary-general of the Future Syria Party, who on October 12 was pulled from her car and executed along with her driver.

The pair had been travelling on the M4 motorway from Qamishli when they were stopped by members of the Syrian National Army's Brigade 123, who pulled Khalaf from the car by her hair and mutilated her body before the executions.

"The Commission finds that there are reasonable grounds to believe that Syrian National Army fighters perpetrated the war crime of murder," Monday's report said, also pointing to a range of other alleged war crimes, including pillaging.

"If any armed group members were shown to be acting under the effective command and control of Turkish forces, these violations may entail criminal responsibility for such commanders who knew or should have known about the crimes," it warned.

Liability could also fall on those who "failed to take all necessary and reasonable measures to prevent or repress their commission", it added.

They also pointed to an air strike the same day in the same region on a civilian convoy of up to 80 vehicles, including families with children and journalists. Eleven people were killed and 74 injured.

And they highlighted the apparent targeting of "objects necessary for the survival of the civilian population", including strikes near the Aluk water station on October 9.

"The strike destroyed electricity cables and, as a result, water pumping came to a halt and the water supply for 460,000 people," the report said.

The UN's Syria commission, set up in 2011 shortly after the civil war began, has repeatedly accused the various sides of war crimes and in some cases crimes against humanity.

In nearly nine years of conflict, more than 380,000 people have been killed and millions have been displaced from their homes.

The report comes after Turkey confirmed Sunday it has launched a full military operation against Russian-backed Syrian forces following clashes in Idlib.

The confrontation between the Russia-backed Syrian forces and NATO-member Turkey, which supports Syrian rebels, has prompted worries over a wider conflict and a migrant crisis in Europe similar to 2015.