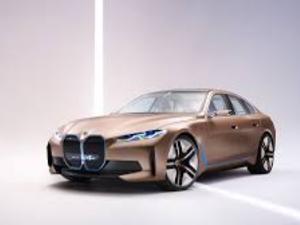 BMW on Tuesday presented its "i4" electric concept car set for release in 2021, as Germany's high-end manufacturers scramble to offer drivers a credible alternative to Tesla.

Years after its pioneering i3 battery-powered compact failed to achieve the hoped-for breakthrough, so far the storied carmaker has no equivalent to Tesla's mass-market "Model 3" on sale.

"This kind of car, a sporty BMW sedan, does not exist with electric power on the market today," chief executive Oliver Zipse said in a telephone conference.

Executives say the i4 will be profitable -- not always a given in the low-margin battery-powered car business.

It is one of a slew of electric models planned for the coming years as carmakers look to escape tighter EU carbon emissions limits, which bear hefty fines.

"We already have half a million BMW electric cars on the roads and we want to double that number by the end of the year," Zipse said.

Endlösung.
That was the German term for its "final solution" to the "Jewish question" but I don't think anybody there ever spelled out the question. It's like Shias being in the majority in Lebanon: the whole point of bigotry and privilege is that you don't talk about it. Has Naharnet.com ever mentioned Article 24 of its Constitution as to giving half of parliamentary seats to Christians? I can tell you, "the fix is in". You have to search long and hard in US news reports to find any mention of this, partly because the cover story is in effect: Lebanon has a Christian president, Shia speaker of parliament and Sunni PM. That's all you need to know. But it's the people's fault if they buy that: what's a speaker of parliament do, lead the ceremonial procession, carry the mace?