Clashes as Migrants Seek to Break Through Turkey-Greece Border 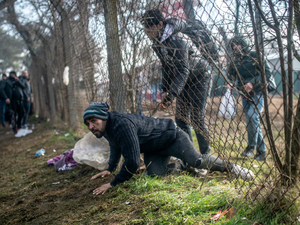 Migrants and refugees clashed with Greek police on the Turkish border on Wednesday as they resumed efforts to enter Europe, leaving at least one person injured, according to AFP correspondents.

The clashes came as Turkish President Recep Tayyip Erdogan issued a fresh call to Europe to support the country with a new influx of migrants that have amassed along the Greek border.

Near the official crossing at Pazarkule, one migrant was shot in the leg as a group of refugees tried to cut their way through the fencing, an AFP photographer said.

The group then threw stones at the Greek police, who responded with tear gas.

Several Turkish ambulances were seen arriving at the scene.

In a video provided to media by the Greek government, a Turkish police officer appeared to fire a tear gas grenade towards Greek border police.

Large numbers of migrants approached the barbed wire fences early on Wednesday, according to AFP journalists.

Multiple shots and shouts were heard, while smoke appeared to emanate from a large fire.

Cordons of riot police carrying shields lined the Greek side of the border, where the town is called Kastanies.

Erdogan said Wednesday that European countries must support Turkey's "solutions" in Syria if they want to resolve the migration crisis, accusing Europe of "trampling" on refugees' rights.

"If European countries want to resolve the issue, they must support Turkey's efforts for political and humanitarian solutions in Syria," Erdogan said in a televised speech.

Erdogan announced last week that Turkey would no longer stop migrants and refugees trying to enter the EU, as he seeks to pressure Europe into providing greater assistance over the humanitarian crisis emanating from Syria.

Turkey, which hosts some four million mainly Syrian refugees, agreed in 2016 to prevent migrant departures towards Europe, but it now says the EU has failed to uphold its promises under the deal.

Several thousand migrants gathered at the Greek border over the weekend after Erdogan's announcement.

While some have been able to reach Greek islands in makeshift boats, many have been repulsed by border guards.

Between Saturday and Monday night, 24,203 "illegal entry attempts" have been blocked and 183 people arrested, the Greek government said.

The EU has vowed to resist Turkey's "blackmail" over the issue, and promised 700 million euros ($777 million) to deal with the crisis, as well as dispatching a rapid intervention team from its border agency Frontex.