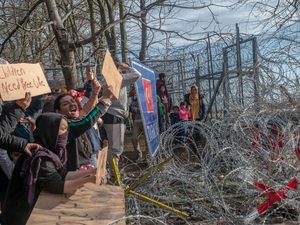 Turkey deployed 1,000 police officers on Thursday to prevent Greece pushing migrants back, its interior minister said, as thousands of refugees massed at the Greek border.

"A thousand special force police officers are deployed from this morning to the Meric river on the border, fully equipped, to prevent people being pushed back," Suleyman Soylu told reporters during a visit to the northwestern province of Edirne.