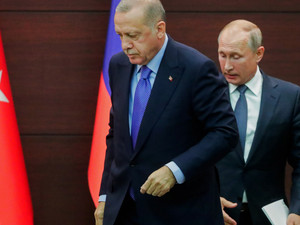 "The situation... in Idlib has become so aggravated that it requires us to have a direct personal conversation," Putin said at the start of the meeting.

The two presidents were meeting after a surge in fighting in Syria raised fears of their armies clashing and launched a new migrant crisis.

"The entire world has its eyes fixed on us," Erdogan told Putin. "The measures and appropriate decisions we will take here will calm the region and our two countries."

Erdogan said before arriving in Moscow that he would be looking for Putin to agree to a rapid ceasefire in Idlib, where Ankara is battling Moscow-backed regime forces.

Putin expressed his condolences for the deaths of Turkish soldiers in Syria, where dozens have been killed in recent weeks as Ankara for the first time launched a direct offensive against President Bashar al-Assad's regime.

But he also pointed out that the Syrian army had "unfortunately... suffered serious losses".

"We need to talk about everything, so that nothing like this happens again and it does not destroy Russian-Turkish relations, which I know you also value," Putin said.