Ancient Greek Sites Could Soon be Available for Rent 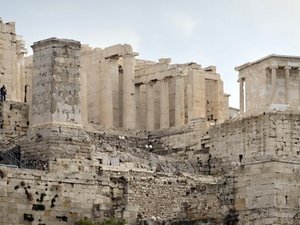 Available for rent: The Acropolis.

In a move bound to leave many Greeks and scholars aghast, Greece's culture ministry said Tuesday it will open up some of the debt-stricken country's most-cherished archaeological sites to advertising firms and other ventures.

The ministry says the move is a common-sense way of helping "facilitate" access to the country's ancient Greek ruins, and money generated would fund the upkeep and monitoring of sites. The first site to be opened would be the Acropolis.

Archaeologists, however, have for decades slammed such an initiative as sacrilege.

The culture ministry said any renting of ancient Greek sites would be subject to strict conditions.

According to a ministerial briefing dating from the end of December, a commercial firm could rent the Acropolis for a professional photographic shoot for as little as 1,600 euros a day ($2,046). Demonstrators could also rent the ancient landmark.

Greece needs every euro it can get. The country's public coffers are drained and the nation is struggling to avoid a historic debt default in March.

Greece was bailed out in May 2010 by the European Union and International Monetary Fund and is in the process of nailing down a second rescue, though it is undergoing tough talks with private creditors to reduce its massive debt mountain.

Commercial use of Greece's archaeological sites has until now been the responsibility of the Central Council of Archaeology, which has been very choosy about who gains access.

In recent decades, only a select few people, including Greek-Canadian filmmaker Nia Vardalos and the American director Francis Ford Coppola, have been able to use the Acropolis, while most filming and advertising requests have been refused.