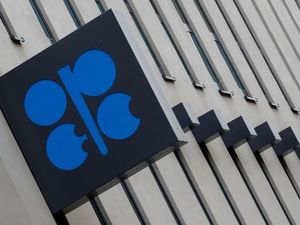 All eyes are on Russia at the gathering of OPEC countries and their allies Friday, with the cartel hoping to convince Moscow to back drastic production cuts to counter the effects of the coronavirus outbreak.

OPEC ministers on Thursday recommended a 1.5-million-barrels-per-day cut in the face of the global slowdown caused by the epidemic and the resulting fall in demand for oil, but the decision hinges on agreement from the so-called OPEC+ grouping -- Russia foremost among them.

Russian news agency RIA Novosti cited a Russian delegation source as saying Moscow wanted to find an agreement, but had not yet decided to accept the cuts.

According to the plan drawn up by OPEC, allies in the so-called OPEC+ grouping would take on 500,000 barrels of the cuts.

Late on Thursday, OPEC said in a statement that delegates had held further consultations and wanted the proposed cuts to run until the end of 2020, not just until the end of June as originally proposed.

Producers had already had to contend with abundant supplies weighing on prices, but in recent weeks the spread of COVID-19 across the world has sent prices plunging.

Ministers from OPEC and OPEC+ arrived Friday at the Vienna-based headquarters of the Organization of Petroleum Exporting Countries, with Iranian Oil Minister Bijan Namdar Zanganeh saying he expected a difficult meeting.

The start of the gathering itself was delayed as the oil ministers of Saudia Arabia and Russia met in private in efforts at backroom diplomacy to push through the additional cut.

The 23 producers gathering have since early 2017 tried to support prices through cuts on production, initially of the order of 1.2 million barrels per day.

In December, they announced a further 500,000 barrel cut with OPEC kingpin Saudi Arabia adding a "voluntary" contribution of 400,000 barrels.

- Crashing into the abyss -

A failure to reach an agreement would send oil prices crashing into the abyss," he said.

Russian officials have been quoted in recent days as being much cooler on the idea of big production cuts, saying that current price levels are satisfactory for Moscow and its budget planning.

The big players in Russia's oil industry fear that an aggressive policy of output cuts will only lead to lost revenue and ceding market share to competitors, particularly the United States with its booming shale oil sector.

Moreover, the Kpler energy analysis company points out that Russia has increasingly been acting as "internal competitor" in the relatively new OPEC+ format.

"In recent years, not only Russia has pledged fewer production cuts than Saudi Arabia... its compliance with the deal has also been minimal," the company noted.

Saudi is the word's third-largest oil producer and Russia the second largest.

Erlam said that "Russia will likely capitulate", but added that Moscow "will do everything possible to drag this out to the last moment to secure the smallest share of the 1.5 million in production cuts".

As well as grappling with the economic fallout from the coronavirus epidemic, delegations have been affected in a much more practical way at this meeting amidst more than 40 confirmed cases of the virus in Austria.

Delegates have had their temperature tested on the way into the building and been advised to avoid handshakes.